A neighborhood cat adopted our yard last week. We have a small garden fountain and he joined the squirrels and birds who drink from it on a regular basis throughout the season. He didn’t look too healthy, he was skinny and . . . reliant. I had my thoughts, which I did not share with the grandchildren, that he had picked our yard for his hospice—a comfortable place to be during his last days. He’s an orange tabby. Green eyes. Terribly thin.

It almost hurt to look at him.

After sitting by the fountain for most of the afternoon, I suffered my spouse’s scorn, and put out a small plate of cat kibble. To the children’s surprise he wasn’t much interested. They brought the dish back in and I added some milk to the dry kibble and popped it in the microwave for a few seconds. Warm milk and softened food, and our little visitor was eating. Some, but not all. And then he didn’t leave.

He’s not the only stray cat in our neighborhood. So over the next few days we have had opportunity to talk with the children about pet ownership and the responsibility we take on when we take a companion pet into the family. We talked about how it is really unfair to a cat or dog or whatever—an animal that has been meant and trained to be our companion—to take away our care and turn it out to live on it’s own, or care so little about it, that the pet has to try and live in a way it was never intended. These abandoned pets, these former companions, often don’t have the skills they need to find food, stay warm, or be safe. They may ‘survive’ for a while, but they seldom thrive. 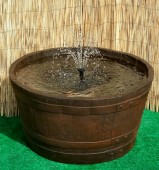 Our visitor didn’t ever get too far from the fountain. Only one evening over the past few days did the kids not find him somewhere in the garden. Most days he took over the black Welcome mat at the back door, sunning himself most of the morning. We had fewer squirrels and birds in the yard last week. They evidently found a different place to get a drink instead of take a chance on the cat. I don’t think he had the interest the give chase, but they didn’t need to know that.

I threw an old towel down under the bush that became his favorite napping spot. He took a lot of naps, the kids tell me.

This morning the kids had been up, and after feeding our indoor cats, a bowel of milk and kibble was prepared for the visitor. When I came down after my shower, there they stood; the granddaughter even had her toddler-brother in her arms—I think more for the comfort than anything else. “Grandpa, Sandy didn’t move this morning.”

Yeah, we named him.

I knew this day was coming. I went outside and donned my leather garden gloves. There were three small faces at the back window. Their Mom and Grandma were there too. Living in the City we’re pretty ruthless when it comes to disposal of dead squirrels and birds in the yard (a couple of dumb birds tend to drown in the fountain each season). But the cat, Sandy, I knew would be different for them.

I pulled a few branches aside, “See,” I hear over my shoulder. “I tried to see if he was breathing (hands going up and down to make his point), but he’s not.” I hadn’t heard the grandson come out but I shooed him back in the house. Our visitor clearly died in his sleep. I am sure not too many strays get to do that, under a favored bush, in the yard of a family who showed him some kindness. I gently removed the stiff form from our garden and put him in the bin for the City to take care of.

After I returned from the grim task of such an undignified disposal, I put away the gloves and went into the house. The granddaughter needed a hug; tears glistened in her eyes. As I held her tight for a moment, we consoled each other that while death comes to all our pets eventually, we thank God that he provides us with such wonderful companions. And tonight in our devotions we’ll say a prayer of thanks to God for Mona our Great Pyrenees, for Klondike and Merci the cats in our home, and for Bailey and Denali, Pepper and Raven, and the other several pets who have occupied our home and our hearts over the years.

There are all kinds of lessons we teach our children along the way. Some of most important lessons are unplanned. This one walked in on four paws and gave us opportunity to show kindness and care. And taught us a lesson on how to say good-bye.