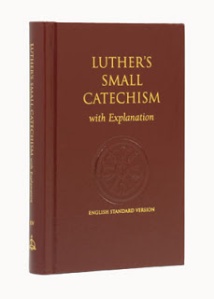 Luther’s Small Catechism consists of the Six Chief Parts of Christian Doctrine (Section 1): the Ten Commandments, the Apostles’ Creed, the Lord’s Prayer, the Sacrament of Holy Baptism, Confession, and the Sacrament of the Altar. It also includes daily prayers (Section 2), a table of duties for Christians (Section 3), and a guide for Christians to use as they prepare to receive Holy Communion (Section 4).

This is sometimes referred to as the Enchiridion. When we confess “the doctrine of the Evangelical Lutheran Church, drawn from the Scriptures, as you have learned to know if from the Small Catechism to be faithful and true” (Rite of Confirmation, LSB Agenda, p. 29), it is only to this that we are subscribing.

An explanation section has regularly accompanied editions of Luther’s Small Catechism since the early days of Lutheranism. Luther was not the author of this explanation, instead, others wrote it while commenting on Luther’s catechism. Ultimately, the root of most current forms of the “Explanation” can be traced back to the work of  Johann Konrad Dietrich in his Institutiones catecheticae, published in the 17th century. That foundational work has been updated over the generations to meet the needs of Christian educators who use the “Explanation” as the basis for catechetical training. Due to the number of contributors and to the constant editing of the text over the centuries, the work cannot be attributed to one or even a few contributors. However, on page 45 of the current edition offered by Concordia Publishing House, you will find,

This explanation has been based upon and largely includes the work of Johann Konrad Dietrich (1575–1639), Carl Ferdinand Wilhelm Walther (1811–1887), Heinrich Christian Schwann (1819–1905), and the committee that prepared the synodical catechism of 1943.

Concordia Publishing House has updated the catechism in cooperation with the LCMS since at least 1943.

The Work of His Hands, by astronaut Jeff Williams, was a project that I enjoyed working on in my capacity as editor at Concordia Publishing House. The book features pictures of Earth taken while aboard the International Space Station (ISS) during Expedition 13 (2006). While we at CPH were were finishing the final edits and alts for The Work of His Hands, Col. Williams was actually serving his second six-month stay aboard ISS as a Flight Engineer on Expedition 21 and then Commanded of Expedition 22. He and his crew launched from Baikonur on Soyuz TMA 16 on September 30, 2009. During this time on the ISS Col. Williams  saw the arrival of two space shuttle missions; the integration of major additions to the structure of the ISS, namely the Russian Mini-Research Module, the US Tranquility Module, and the Cupola ( a boon for the astronauts’ earth observation); and went on two “space walks” outside the station. This, his third flight into space, concluded on March 18, 2010, with the Soyuz TMA 16 landing in Kazakhstan.

I grew up breathing the excitement generated by JFK’s announcement that we were going to the moon. I built model rockets, model orbital modules, and model lunar landers; I shot-off CO2-powered rockets in the ball field, and I attached notes to “weather balloons” hoping to hear from far off locations when the note finally landed (if not the balloon). Working on The Work of His Hands was the closest thing to revisiting the heady days of childhood-remembered I have experienced. Add to that getting e-mail from Col. Williams while he was aboard the ISS, well, you get the idea–I was twelve all over again.

This video features some great footage from inside the ISS, shot by Col. Williams on his last mission, Expedition 21/22, and we get to hear Col. Williams talk about his faith as he reflects on his unique perspective viewing the work of God’s hands.

Oh, and no, none of my boyhood models remain.

The new blog for Lutheranism 101 went live today. While I still have a kink or two to work out, it is already shaping up to be an interesting project.

Lutheranism 101 is designed to give you a quick, usable, and comprehensive overview of Lutheran faith and practice. While we have tried not to grind any axes, we would be less than living, breathing human beings if we told you that what you have here is totally impartial and neutral. First, we must acknowledge that we are writing about Lutheranism from an American perspective. So in discussions of customs, history, and missions, Lutherans in other parts of the world (and there are many!) will have a different perspective. We are also writing from within a tradition in the Lutheran Church that is identified as orthodox and confessional. The term orthodox simply means correct or right belief. The term confessional has come to mean different things to different people, but at its heart these two terms signify those who model what they believe, teach, and confess on God’s Word and the historic teachings (Confessions) of the Lutheran Church as they are contained in the Book of Concord. Finally, we have to acknowledge that Lutheranism 101 does not cover the entire length and breadth of our subject. However, it is a good place to start your exploration of Lutheran belief and practice.

Lutheranism101.com is an online extension of the book Lutheranism 101 by Concordia Publishing House. The book will be available in October, Click on the banner image above, or use the link in the sidebar, to get access to the website. If you would like to download a sample of the book, or order the book, use this link.

It was announced on the Treasury of Daily Prayer Facebook group and Wittenberg Trail group, that sometime in the next week there will be an interesting announcement regarding the project to have the Concordia Theological Seminary Kantorei record the prayer services included in Treasury.

That’s it. Not much detail, but I am still working on the details of what it is we are going to announce.

Yup, I am a tease. But stay tuned. The announcement will hit the CPH website, Facebook and Wittenberg Trial communities first, and then probably all the CPH Twitter-ers and bloggers will be able to point you to the information as well.

To join the Facebook group you can go here. The Wittenberg Trail group is here. To join the Treasury of Daily Prayer Twitter feed, click here.

At the turn of the millennium Life magazine rated Martin Luther as the third most important person of the last 1,000 years. His confession of the Gospel of Christ has given direction and purpose to many both inside and outside the Lutheran Church. Still after nearly five hundred years since the Reformation began, the writings of Martin Luther continue to inform and inspire preaching and teaching of Jesus Christ arond the world. Therefore it is a shame, that while the fifty-five volumes of the American Edition is the most extensive collection of Luther’s works in English, it doesn’t contain even one half of all Luther’s writings.

But with the publishing of Luther’s Works, American Edition, Volume 69, that is all about to change. Concordia Publishing House has embarked on a historic project to translate and publish 20 new volumes of Luther’s Works that have never been translated into English. A team of scholars and translators have been at work. This first volume in the new series demonstrates that this team is committed to ensuring that the new editions of Luther meets the highest levels of scholarship and quality.

In announcing the publishing of this first volume in the Luther’s Works extension, my colleauge Dr. Benjamin Mayes writes:

Volumes 22–24 of Luther’s Works: American Edition did not give us all of Luther’s preaching on the Gospel of John. Now, in the new volume 69, we have Luther’s exposition of Jesus’ high priestly prayer in John 17, as well as his preached meditations on the entire passion and resurrection of our Lord according to John. In LW 69, Luther is an expert guide through the mysteries of Lent and Easter. Dr. Christopher Boyd Brown’s introductions and footnotes in many ways surpass the scholarly apparatus of the old series. Brown sets Luther’s commentary in the context of patristic, medieval, and contemporary Reformation commentaries on John in order to show what was most important to Luther as he preached on Christ’s passion.

The last part of our new volume is truly unique. For the first time, we have collected and translated all of Luther’s sermons on John 20:19–31, where Jesus breathes on His disciples, gives them the Holy Spirit, and bestows on them His authority to forgive and retain sins. This passage, which is quoted and explained in many editions of the Small Catechism, as well as in the twenty-eighth article of the Augsburg Confession, has been the center of not a little controversy over the years. The sermons here in LW 69 show in what ways Luther’s explanation of this passage changed through his career, and in what ways it stayed the same. In every sermon Luther’s concern to uphold the forgiveness of sins through the word of absolution is clear and heartening.

Whether, you are new to Luther, or whether you have been using the American Edition for years, I encourage you to check out this great collection of sermons.

You can order you copy of volume 69 at the cph.org website, or you can go here to find out more about the new series and even become a subscriber. 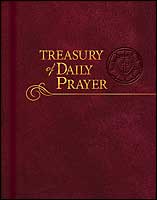 To place a web order go to cph.org

“Makes me want to read Holy Scripture each day and gets me in the mode of reading Scripture more often.”–Gary

“The book is so easy to use, that there remain no excuses or awkwardness in sharing this time, which now has become a precious habit.” –Brigitte

Don’t let this event end without your order

Make Treasury of Daily Prayer part of your life today!

Blog My Soul
Create a free website or blog at WordPress.com.